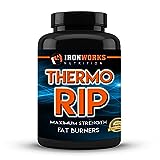 RIP Fat Burners are one of the strongest weight loss capsules available in the UK, developed to aid the metabolism of fat cells, suppress your appetite and increase the rate at which your body burns calories.

RIP fat burners are ideal for anyone trying to lose body fat and tone up their appearance and when used in conjunction with a healthy balanced diet can produce amazing results for both men and women.

RIP fat burners can reduce bodyweight in a safe and effective way without any of the unwanted side effects of prescription diet pills.Energy levels are increased while taking these high strength fat shredding capsules.

Made from natural and tried and tested ingredients here in the UK.When combined with a healthy fitness regime can produce that toned ripped look.Rapidly absorbed for fast effective weight loss.

Bitter Orange (320mg) the strongest of all ingredients increases the bodies metabolism and assists in the shredding of unwanted body weight.

N-Acetyl-L-Carnitine (10mg) helps convert fat in the body into energy and in doing so speeds up weight loss and prevents a build up of unwanted fats in the blood stream.

RIP Directions for Use

Take one capsule before breakfast with half pint of water and second capsule around 4 hours later with water.

Do not take within 5 hours of bedtime.

This website uses cookies to improve your experience while you navigate through the website. Out of these, the cookies that are categorized as necessary are stored on your browser as they are essential for the working of basic functionalities of the website. We also use third-party cookies that help us analyze and understand how you use this website. These cookies will be stored in your browser only with your consent. You also have the option to opt-out of these cookies. But opting out of some of these cookies may affect your browsing experience.
Necessary Always Enabled

Any cookies that may not be particularly necessary for the website to function and is used specifically to collect user personal data via analytics, ads, other embedded contents are termed as non-necessary cookies. It is mandatory to procure user consent prior to running these cookies on your website.