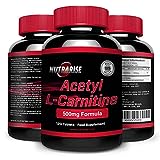 Acetyl L-Carnitine is also known as ALCAR. It helps boost energy, performance and overall health. If you struggle to find energy during workouts at the gym, your ALCAR levels could be at low levels.

It is a powerful fat burner. Researchers have found that taking 2g of L-carnitine at the same time as 80g of fast-acting carbs in the morning and then four hours later increased fat burning by 55%.

* Maintains pH levels within the body to maximize muscle production

We’re so sure you’ll love it that we offer a Money Back Guarantee!

Click ”Add To Cart” to get your bottle today!

This website uses cookies to improve your experience while you navigate through the website. Out of these, the cookies that are categorized as necessary are stored on your browser as they are essential for the working of basic functionalities of the website. We also use third-party cookies that help us analyze and understand how you use this website. These cookies will be stored in your browser only with your consent. You also have the option to opt-out of these cookies. But opting out of some of these cookies may affect your browsing experience.
Necessary Always Enabled

Any cookies that may not be particularly necessary for the website to function and is used specifically to collect user personal data via analytics, ads, other embedded contents are termed as non-necessary cookies. It is mandatory to procure user consent prior to running these cookies on your website.